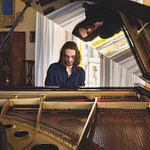 Vasco Rosado Pimentel is a Portuguese pianist born in 1994. As the son of a music teacher mother and piano tuner father, Paulo Lamas Pimentel, he started going to concerts at an early age and music was a constant at home. He is part of the fourth generation of renowned Portuguese musicians.

At four he started piano lessons with Lilia Rakova. Aged 10 he entered the Instituto Gregoriano de Lisboa where he completed the eighth grade in classical piano with Martin Gerhardt. He also studied percussion at the Escola da Orquestra Metropolitana de Lisboa and the drums at Escola de Jazz Luiz Villas-Boas. At 14 he showed an interest in jazz, studying with pianists Paula Sousa, Dan Hewson and Ana Araújo. He took the piano course at the Escola de Jazz Luiz Villas-Boas with Óscar Graça. In 2019 he completed his jazz piano Master’s degree at the Escola Superior de Música de Lisboa with pianist João Paulo Esteves da Silva, his teacher for five years.

He has taken part in several jazz workshops in Portugal and Spain where he had the opportunity of learning with Aaron Goldberg, Jorge Rossy, Jeff Ballard, Michael Kanan, Ben Street, among others. He has performed with several jazz and world music ensembles and has stepped onto the stages of important festivals such as EDP Cool Jazz, os Dias da Música in CCB (Centro Cultural de Belém), with his latest projects, the Vasco Pimentel Trio and his duo Jugalbandish (piano and tablas). As a sideman he has recorded with Inês Pimenta Son of Daedalus (2018) and with Gonçalo Sousa Nova Construção (2019).

Born in 1999 in Carvalhal, Portugal, into a family of musical activity and tradition, RodRigo coRReia’s passion for music emerged at an early age. At 10 he began his formal studies in classical double bass at the Conservatory of Caldas da Raínha. Since then he has shared the stage with some of the most highly regarded artists of the Portuguese and international music world.